All sales are final. (under certain circumstances we can refund your purchase price with a 20% restocking fee) We accept MO, checks, or Visa/Mastercard/American Express. We Ship to FFL/SOT dealers only, we will need to have an email from your dealer with their FFL/SOT, with your info (name, and what you are buying) on it emailed to orders@hitecarms.com

NO sales to California or any other banned state, please know your local laws.

–> NOTE: We are currently 22 weeks out on new builds.<–
Placing a deposit now gets you in the queue!

*** In response to supply constraints and Germany’s nonproduction since 1/1/2021, due to COVID, we are no longer able to
provide the Navy ambidextrous packs. All trigger packs will be Navy 3 position SEF packs.***

In 1974 H&K initiated design work on a sound-suppressed variant of the MP5, designated the MP5SD (SD—Schalldämpfer German for “sound suppressor”), The TPM P5SD SBR A3 features an integral but detachable aluminum sound suppressor and a lightweight bolt. The weapon’s 146 mm (5.75 in) barrel has 30 2.5 mm (0.1 in) ports drilled forward of the chamber through which escaping gases are diverted to the surrounding sealed tubular casing that is screwed onto threading on the barrel’s external surface just prior to the ported segment. The suppressor itself is divided into two stages; the initial segment surrounding the ported barrel serves as an expansion chamber for the propellant gases, reducing gas pressure to slow down the acceleration of the projectile. The second, decompression stage occupies the remaining length of the suppressor tube and contains aluminum baffles with several compartments which increase the gas volume and decrease its temperature, deflecting the gases as they exit the muzzle, so muffling the exit report.

The bullet leaves the muzzle at subsonic velocity, so it does not generate a sonic shock wave in flight. As a result of reducing the barrel’s length and venting propellant gases into the suppressor, the bullet’s muzzle velocity was lowered anywhere from 16% to 26% (depending on the ammunition used) while maintaining the weapon’s automation and reliability. The weapon was designed to be used with standard supersonic ammunition with the suppressor on at all times.

# DO NOT USE SUBSONIC AMMUNITION EVER IN THIS FIREARM # 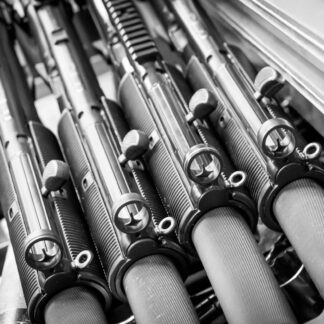 Filtered by in stock only Dismiss